Intended Audience: Anyone who is interested in wage laws and economic/social justice.

I came across a Twitter exchange on minimum wage by Professor Anthony Bradley. Bradley is a fellow at the Acton Institute (where I also received an economics mini-grant during my transition from Christian studies to economics; I’ve since left the gospel of profit/neoliberalism. Though, my critique of Acton would not be as harsh as  David Bentley Hart: “Acton…[is] a sort of toxic-waste site for the disposal of emotionally arrested and intellectually abridged reactionaries…”). In any case, the exchange reminded me of an article I wrote for the Rapid City Journal called “Rethinking the Minimum Wage.” 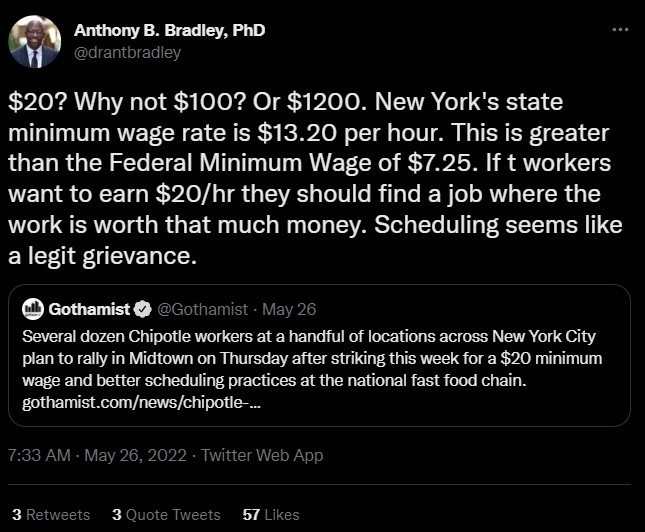 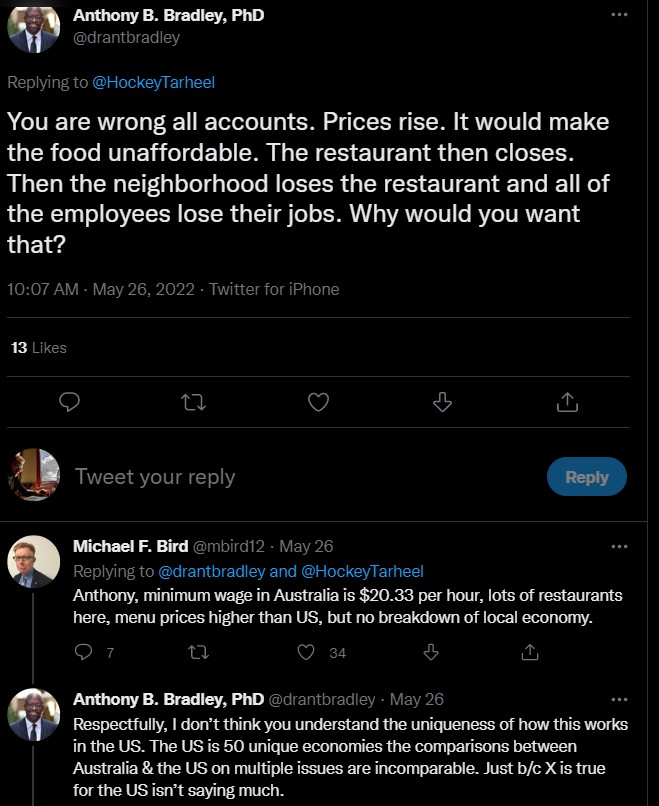 Unfortunately, it’s behind a paywall. So I have most of it here for you below:

Advocates of minimum wage argue that many people earn a wage that is both unfair and unworkable given a current economic situation. If a person working full-time doesn’t earn enough to actually get by in today’s economy, we can expect poverty and its problems to get worse—which affects everyone. Hence the concepts of “minimum wage” and “living wage.” Minimum wage laws are blanket price controls and have the advantage of simplicity. But they fail to account for the radical differences in the cost of living across an economy. Hence “living wage” laws, which estimates the cost of food, child care, health care (both insurance premiums and health care costs), housing, transportation and other necessities given a certain number of people in the household for a particular region.

Critics of minimum and living wage law apply neoclassical models of supply and demand to the debate. Minimum wage laws function as a price-control (in this case, a “price floor”) for the cost of labor. By increasing the cost of labor, suppliers (producers/employers) will have to direct more funds towards labor costs and away from other business expenses. Critics then provide examples of how minimum wage laws hurt those it is supposed to help, like entry-level restaurant workers. Just think: if you own a restaurant with 10 employees and pay them $10/hr but are now forced to pay $15/hr, you’re going to have to find the money to pay for this increased expense. You might fire an employee to make ends meet—probably the least skilled worker. Thus, minimum wage law is said to “knock out the bottom rung of the ladder”; it can make life harder for entry-level workers, and incentivize businesses to automate with robots/AI/software altogether.

As you should be able to see by now, advocates and critics of minimum wage operate within different frameworks, and both have legitimate points. This is why they regularly talk past each other without actually addressing each other’s concerns. It’s a fact: most businesses can afford minimum wage increases, but some can’t. (U.S. Senator John Thune also learned about inflation the hard way when his recent example of working for $6.25 as a kid in the 1970s backfired when critics figured it amounts to about $20/hr in today’s dollars!)

Advocates tend to reject neoclassical models of supply and demand—and sometimes they have good reason for it. The predictions of minimum wage laws do not always produce the results they’re supposed to in real-life. (This is where an evidence-based approach is more helpful than theory and theorems.)

Critics (usually employers), on the other hand, better understand the challenges of production and the supply end (which most workers don’t have to deal with). This encourages employers to have less empathy towards the cry workers and care more about protecting their own capital. “Don’t like what you get paid? Tough luck peasant! Find another job at a different employer (and besides, my teenage kid wants a new house on the lake—and I need your help to generate the profits to pay for it!”). Employers habitually treat workers as inputs of production/property, and act is if they have a greater right to a (usually more luxurious) living than those they employ—even if the employees work far harder in warehouses and shops than the owners. (This is why CEOs, owners, and the wealthy frequently glamorize working 80+ hours, or in Elon Musk’s case, sleeping on a couch at work: it provides the much-needed justification for paying their employees so little and/or working them so hard, and eases the guilt of their own conscience.)

In my view, there are two simple solutions to this century-long and now very stale debate: (1) abolish the employer/employee relationship so workers decide for themselves what they get paid and directly manage the production process without layers of hierarchical power, or (2) enact a minimum wage law that is contingent on at least one of two variables: (a) owner profitability (i.e., the ability of a firm to obey the law without going under) and (b) local costs of living (i.e., zipcode-based minimum wage law).

The first solution is ideal, because it eradicates all the tension between employer and employee entirely. Wage-labor has always been controversial since its inception in industrial capitalism, and there is no genuine, long-term contentment of workers until they own the means of production themselves—whether as a sole proprietor, a partner, or an equity-holding associate at a worker-owned firm. There are countless studies showing preference towards worker-owned firms over exploitative corporatism (and I’ve documented this at length in a recent journal article entitled “Owning Up to It: Why Cooperatives Create the Humane Economy Our World Needs”). We regularly talk about achieving “financial freedom” and “getting out of the rat race” as an employee, while employers use slave metaphors towards workers like “I’m cutting you lose” because, well, all this language is fitting!

The second option is far from ideal, as it continues to depend on party politics and requires some actual thought and structure (not something the government is always good at). Nevertheless, it does actually address the main concerns of both critics and of advocates, and remains very possible. Of course, one could then just as well forget minimum wage laws and move towards a “living wage” law like those in London and New Zealand.

Whatever the case, there are some important and viable alternatives to the current discourse about minimum wage. Both workers and employers, advocates and critics, should be upset not at each other as much as at the politicians who fail to look forward, and obsess over symptoms and not causes.