Most Relevant Audience: Those interested in current events and systemic racism. 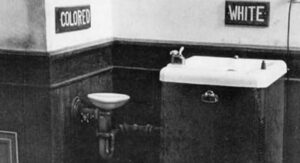 The more and more I read about American cultural history, the more and more I am troubled by the increasing number of popular, public, and blanketed denials of systemic racism in the U.S. It’s one thing to say your political opponent is overemphasizing something. It’s another to deny a historical and present reality of mass dehumanization and (often) hidden oppression, during and living amidst their dehumanization and oppression.

Somehow, (a) shoddy use of a few popular statistics regarding race, (b) the generic impossibility of proving racial prejudice as the determining motivation of certain acts, and (c) idiots on the street are sufficient to dismiss centuries of cultural, legal, social, and physical oppression, and all of its mores in thought, religion, language, and economics. It bears as much critical thinking as iterating arguments like these (all of which I’ve heard in phone conversations and published essays):

And on and on it goes with other (mostly) reactionaries against anything even remotely-sounding progressive (“progressive”?), such as Thomas Sowell, Coleman Hughes, Candace Owens, John McWhorter, and other public professionals and intellectuals (who also seem blissfully unconcerned about how their lectures and interviews are being weaponized). It has, in a way, become fashionably contrarian and (conveniently) “above the fray” to be anti-anti-racist. President advisor Larry Kudlow was speaking for many when he recently said, “I don’t believe there is systemic racism in the U.S.”

Besides the obvious forms of systemic/structural racism that have been around for sometime, we should probably ask: what are the more subtle, unrecognized forms of systemic racism that white people like myself and the mass of talking head reactionaries are so allergic to?

Racist language is one. I was reading through a book donated to me by my (now-retired) pastor(s), and it contained an essay written from 1976 on the subject. Below is a direct quote of the first section. (Trigger warning: racial slurs. Trigger warning for white evangelicals: The following text contains the scary anti-Christian satanic “critical race theory” propaganda you’ve been warned about from your local apologists, public figures, and southern baptist seminary professors; cover eyes as necessary.)

Racism in the English Language

An integral part of any culture is its language. Language not only develops in conjunction with a society’s historical, economic and political evolution; it also reflects that society’s attitudes and thinking. Language not only expresses ideas and concepts, but actually shapes thought. If one accepts that our dominant white culture is racist, then one would expect our language—an indispensable transmitter of culture—to be racist as well. Whites, as the dominant group, are not subjected to the same abusive characterization by our language that people of color receive. Aspects of racism in the English language that will be discussed in this essay include terminology, symbolism, politics, ethnocentrism, and context.

Before beginning our analysis of racism in language, we would like to quote part of a TV film review which shows the connection between language and culture:

Depending on one’s culture, one interacts with time in a very distinct fashion. One example which gives some cross-cultural insights into the concepts of time is language. In Spanish, a watch is said to ‘walk.’ In English, the watch ‘runs.’ In German, the watch ‘functions.’ And in French, the watch ‘marches.’ In the Indian culture of the Southwest, people do not refer to time in this way. The value of the watch is displaced with the value of ‘what time it’s getting to be.’ Viewing these five cultural perspectives of time, one can see some definite emphasis and values that each culture places on time. For example, a cultural perspective may provide a clue to why the negative stereotype of the slow and lazy Mexican who lives in the ‘Land of Manana’ exists in the Anglo value system, where time ‘flies,’ the watch ‘runs,’ and ‘time is money.’

A Short Play on “Black” and “White” Words

Some may blackly (angrily) accuse me of trying to blacken (defame) the English language, to give it a black eye (a mark of shame) by writing such black words (hostile). They may denigrate (to case aspersions; to darken) me by accusing me of being blackhearted (malevolent), of having a black outlook (pessimistic, dismal) on life, of being a blackguard (scoundrel)—which would certainly be a black mark (detrimental fact) against me. Some may black-brow (scowl at) me and hope that a black cat crosses in front of me because of this black deed. I may become a black sheep (one who causes shame or embarrassment because of deviation from the accepted standards), who will be blackballed (ostracized) by being on a blacklist (list of undesirables) in an attempt to blackmail (to force or coerce into a particular action) me to retract my words. But attempts to blackjack (to compel by threat) me will have a Chinamen’s chances of success, for I am not a yellow-bellied Indian-giver of words, who will whitewash (cover up or gloss over vices or crimes) a black lie (harmful, inexcusable). I challenge the purity and innocence (white) of the English language. I don’t see things in black and white (entirely bad or entirely good) terms, for I am a white man (marked by upright firmness) if there ever was one. However, it would be a black day when I would not “call a spade a spade,” even though some will suggest a white man calling the English language racist is like the pot calling the kettle black. While many may be niggardly (grudging, scanty) in their support, others will be honest and decent—and to them, I say, that’s very white of you (honest, decent).

The proceeding is of course a white lie (not intended to cause harm), meant only to illustrate some examples of racist terminology in the English language.