I have hesitated publishing this for several years, but found it timely and appropriate to do so now in light of things I’ve recently learned about Russell Moore. His resignation letter from 2020 was recently “leaked” (presumably by someone else). I hereby publish mine and my story, albeit, longer after the fact, and with a brief commentary (found below).

It’s important for the light of truth to come out of the darkness—especially as victims of predatory, unjust, and/or unethical people and organizations in power are amassed. It’s hard to think of a more socially responsible thing to do—especially given the incredible effort dedicated to maintaining such horrifying structures, patterns, and discourses. While I often wish to just walk away and forget many things from the past, the next generation needs to be warned of serious hazards on the road ahead, and our voices are stronger together. Enough is too much.

The chair of the Southern Baptist Convention’s Ethics and Religious Liberty Commission, Russell Moore, recently left his post and the SBC. His somewhat shocking resignation letter has been making the rounds in the last 48 hours, since the SBC is the largest Protestant denomination in the U.S., and Moore was one of the few SBC figures to not endorse Donald Trump.

“My family and I have faced constant threats from white nationalists and white supremacists, including within our convention,” Moore wrote. “Some of them have been involved in neo-Confederate activities for years. Some are involved with groups funded by white nationalist nativist organizations. Some have just expressed raw racist sentiment behind closed doors.”

Moore made clear he believed his opponents were led by then-Executive Committee Chairman Mike Stone, who also headed the task force looking into the ERLC. Moore alleges this group had used its oversight of the Cooperative Program to mount investigations. Their objections, Moore charged in colorful terms he disavowed, were that he was “‘not playing enough to the Bubbas and the rednecks; they pay the bills.’”

The real intent of the investigation, he wrote, was to keep him quiet: “so that Southern Baptists do not hear what goes on.”

While Stone has said in the past he was not seeking Moore’s resignation, Moore in his letter said this was part of a strategy to keep him “in psychological terror, so that I will not say what the Southern Baptist Convention has assigned me to say, much less to reveal what I know about what goes on behind the scenes.”

…When God called me to himself in Jesus, and when he called me to serve him in ministry, he called me to stand for the truth, to point the way to the kingdom, to die to self, and to carry the cross. He did not call me to provide cover for racial bigotry and child molestation. I will not do that,” he wrote.

Two particular quotes from this selection arrested me:

“…in psychological terror, so that I will not say what [they have] assigned me to say, much less to reveal what I know about what goes on behind the scenes.”

“…They want me to be afraid of them…”

Religious PTSD from under SBC power. Living in fear. Getting punished for doing what’s right in a position of leadership.

Three years ago I found myself at what seemed to be the height of my career: newly appointed Academic Dean, finally living off a relatively decent salary as an Associate Professor, and doing what I love (teaching).

I also found myself sitting in a dingy crisis mental health facility for suicidal ideation. To paraphrase:

“What’s going on?” the therapist asked.

“I, uh, I feel really unstable, like my mind and soul is being ripped apart. I can’t keep it all together; I have insane, extreme anxiety. I just need to escape this.”

“Oh gosh, I’m so sorry. What are you having anxiety about?”

“Most of it has to do with what’s going on at work. I’m forced into a position where there’s no winning; I feel like I’m being punished for doing what’s morally right (and all in a “Christian” setting). I’m utterly disoriented. And I think I’ll never be employed in higher ed again, and that all my degrees were a waste of time. I’m 31 and my career could be over. And for what? I don’t understand…”

Yes, “work” was my job as Chief Academic Officer and (founding) faculty member at an evangelical college that was all but Southern Baptist in name. The (founding and current, at the time) President was C. Richard Wells, the former President of Criswell College and former Dean of Chapel at Union University. I’ve never known anyone more loyal to and enthusiastic about the SBC. Anyway, virtually everyone at the non-denom school (but me, at least in my later years of employment) was ultra right-wing—die hard Republican, young-earth creationist, inerrantist, “complementarian,” Zionist, etc. Above all, as a “classics college” (modeled after Douglas Wilson’s New Saint Andrews College), white supremacy reigned—or as I would hear continually, “The West is the Best.” John Witherspoon College (2012-) was going to turn back the clock to the 1700s where we didn’t have to worry about the gays or blacks or heretics encroaching on our hard-fought territory. We were going to “Make America Great Again.” If we failed, western civilization would miserably fail with us.

I wasn’t aware of all this baggage when I first got involved; I just wanted to teach biblical studies and theology, enjoyed the humanities in general, and this was the only possibility for that kind of academic opportunity in the region. But after several years of evolving intellectually and spiritually, with the institution moving further right and me moving further left, I was struggling to keep the institution alive and keep my integrity at the same time. Near the beginning of the 2018 fall semester, I was faced with a particular choice to keep my integrity and do the right thing (no specifics necessary at this point), bail upcoming Convocation, and risk losing my career altogether, or continue to tow the party line, say the right words, keep my salary, and attend Convocation as normal. I’d like to think I handle stress well, but for one reason or another, perhaps an accumulation of various stressors, I just couldn’t handle it at this point. I had been broken.

In that therapy office I didn’t feel like I gained a ton of direct help. But I did indirectly get the clarity that I needed. I looked around and realized what was happening: that this was the terminus, the fruit of the “religious” and “educational” system in which I was involved. Ultimately, I learned that if my religious tradition and my workplace is causing me to seriously think about suicide (especially for following my own conscience), then the problem might not actually be me, after all. Maybe it’s this entire world that has been constructed, which causes people (like me) to lose their wits?

With this realization, like Moore, I lost all my fear about moving forward. If this meant the end of my dreams as a fulltime professor so be it. I would rather live poorly with freedom and internal peace than less poorly in constant fear and captivity.

Besides, when you’ve taken a good, long hard look at the abyss, and then walked away from that cliff, what was I really afraid of?

It all sort of reminds me of something Charlotte Bronte wrote (in a similar but different situation):

I care for myself. . . I will keep the law given by God; sanctioned by man. I will hold the principles received by me when I was sane, not mad—as I am now. Laws and principles are not for times when there is no temptation: they are for such moments as this, when body and soul rise in mutiny against their rigour; stringent are they; inviolate they shall be. If at my individual convenience I might break them, what would be their worth?

It was clear what I needed to do, and I did it, and I lost my Associate Professorship and position as Dean as expected. Life goes on; I began driving for Lyft, delivering pizza, hauling gravel for a landscape company, etc., as over 40 rejection emails/letters poured in over the years following. (The average number of applicants for 1 full-time position in higher ed is somewhere between 120-250; think about those job odds before entering higher ed). Like thousands of other PhDs my age, I also entered the army of adjuncts.

So I can’t say I understand everything Moore went through. But I sure know about the “psychological terror” of the system he’s talking about: being a cog in the machine, under the gun of powerful people, forces, and institutions that are absolutely hellbent on maintaining their own power. More specifically, I know what it’s like when it is expected of you to not say anything about:

It was an environment designed to protect concentrations of power, and systematically eliminate any possible threats via coercion, manipulation, policy and politics, or whatever. I know about this because I helped build it.

Because God, religion, the Bible, and ethics has nothing to do with such institutions. It never has. The SBC in particular was not created out of some theological disagreement or ethical disagreement. Those words, discourses, statements of faith are virtually always a cover for economic and social realities. (On that score, Marx was right: Material economic conditions create ideologies that are used to justify economic and social oppression. The mid-Atlantic slave trade, for example, gave rise to racist ideas against African Americans, which then were used to justify slavery. The Catholics’ doctrine on purgatory and indulgences funded building projects and the elite class. Etc.)

It’s a historical fact: the SBC was created to defend southern slaveowners (that is, white male capital). That is literally why it exists. And Moore’s situation makes clear (as countless others have) that protecting white male capital is still why it exists. There is no reason to get rid of someone like Moore otherwise, especially as the SBC loses one prominent voice and pastoral figure after another in its accelerated decline. It doesn’t need another causality. But as both Moore and I have learned, everything is fine in such institutions—you can get away with almost anything, so long as (1) non-white people stay in positions of subordination, (2) non-males and non-heterosexuals stay in positions of subordination, and (3) non-wealthy (including the abused and vulnerable) stay in positions of subordination. It’s all there in Moore’s letter. 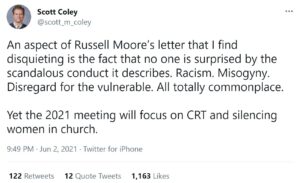 …And to some degree, it’s all there in my letter as well, precisely because the colonizing spirit was (and remains) the de facto spirit of John Witherspoon College, just as it does for the SBC and its other tentacles. While different in many ways, my letter of leave/resignation is all too similar when it comes to the internal and (I would say) spiritual darkness. Moore’s words were “psychological terror” and fear. Mine were, “I am truly exhausted from having my conscience miserably vexed and flayed,” “tiring and anxious,” and “constantly anxious.”

Well, whatever the case, I’ll let you compare them yourself, and draw your own conclusions.

Postscript: Essential Reading on This Subject

Jamin Andreas Hübner, Deconstructing Evangelicalism: A Letter to a Friend and a Professor’s Guide to Escaping Religious Fundamentalism.

Jemar Tisby, The Color of Compromise: The Truth About the American Church’s Complicity in Racism

J. Russell Hawkins, The Bible Told Them So: How Southern Evangelicals Fought to Preserve White Supremacy