About This Logbook
Intended Audience: Everyone, particularly Americans and conservatives 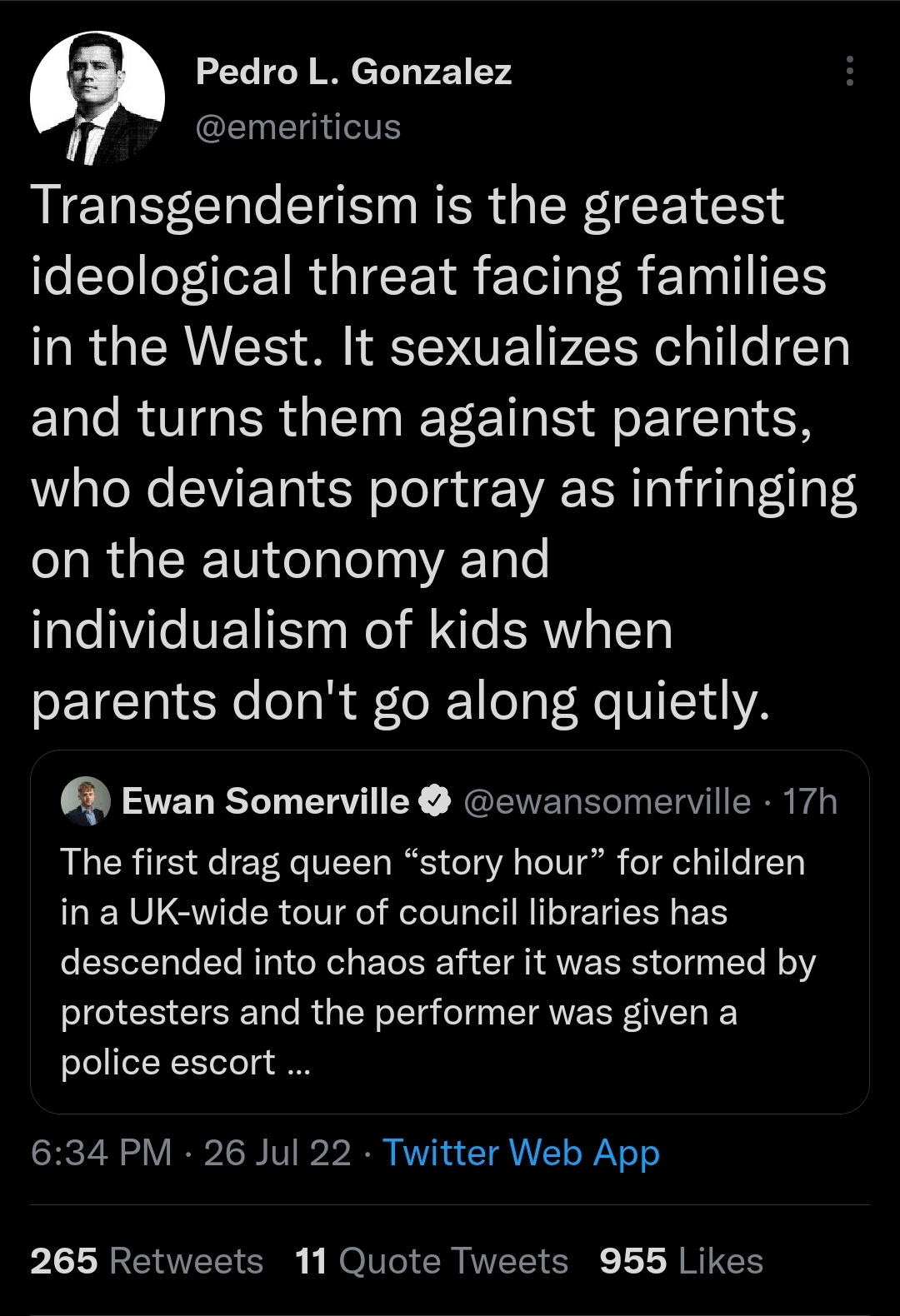 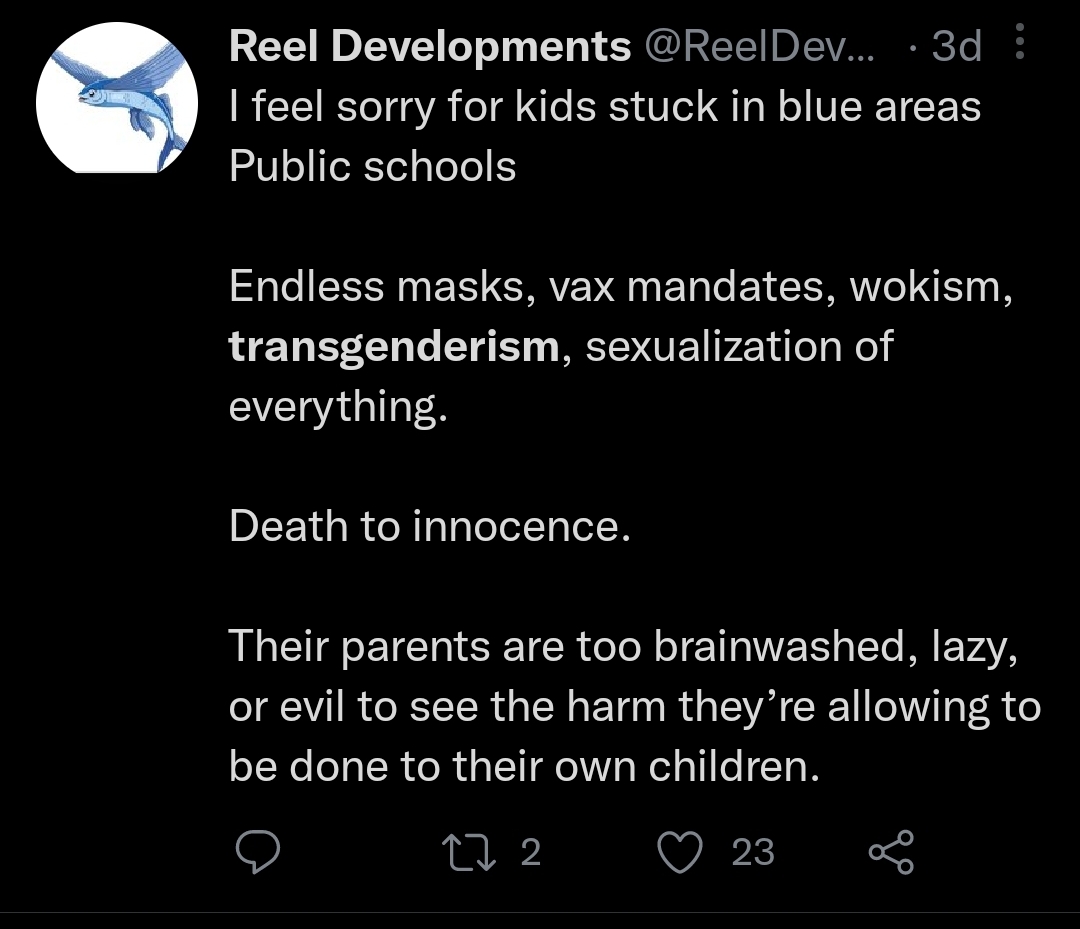 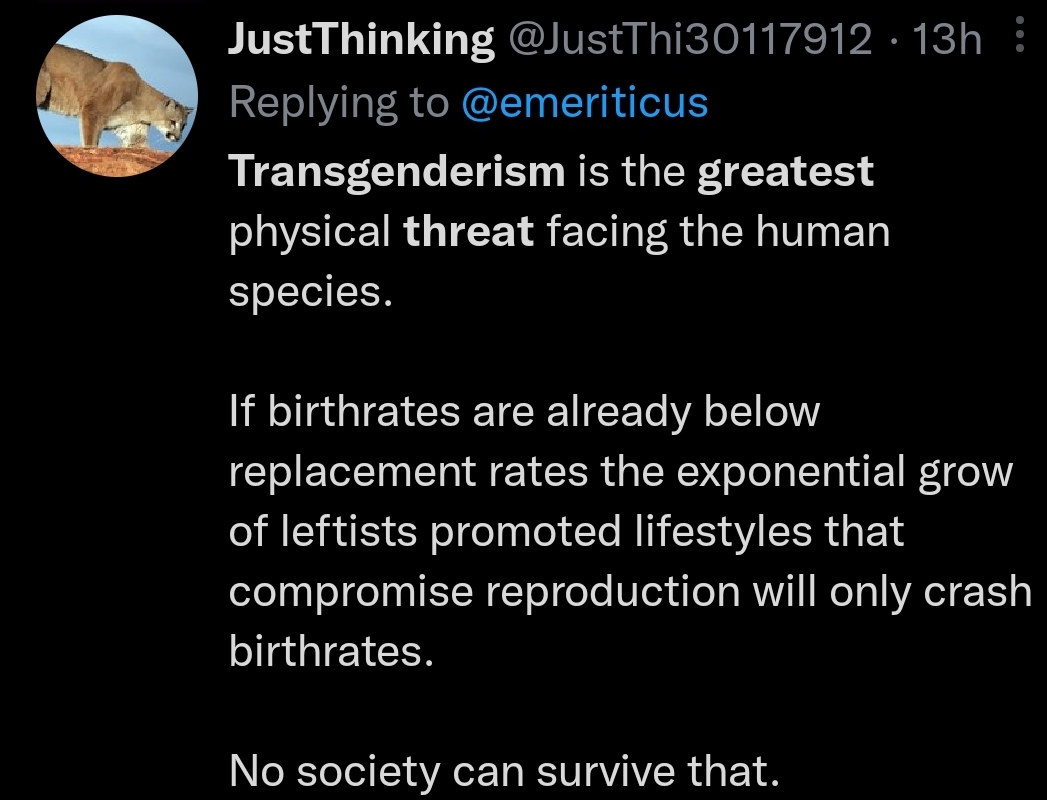 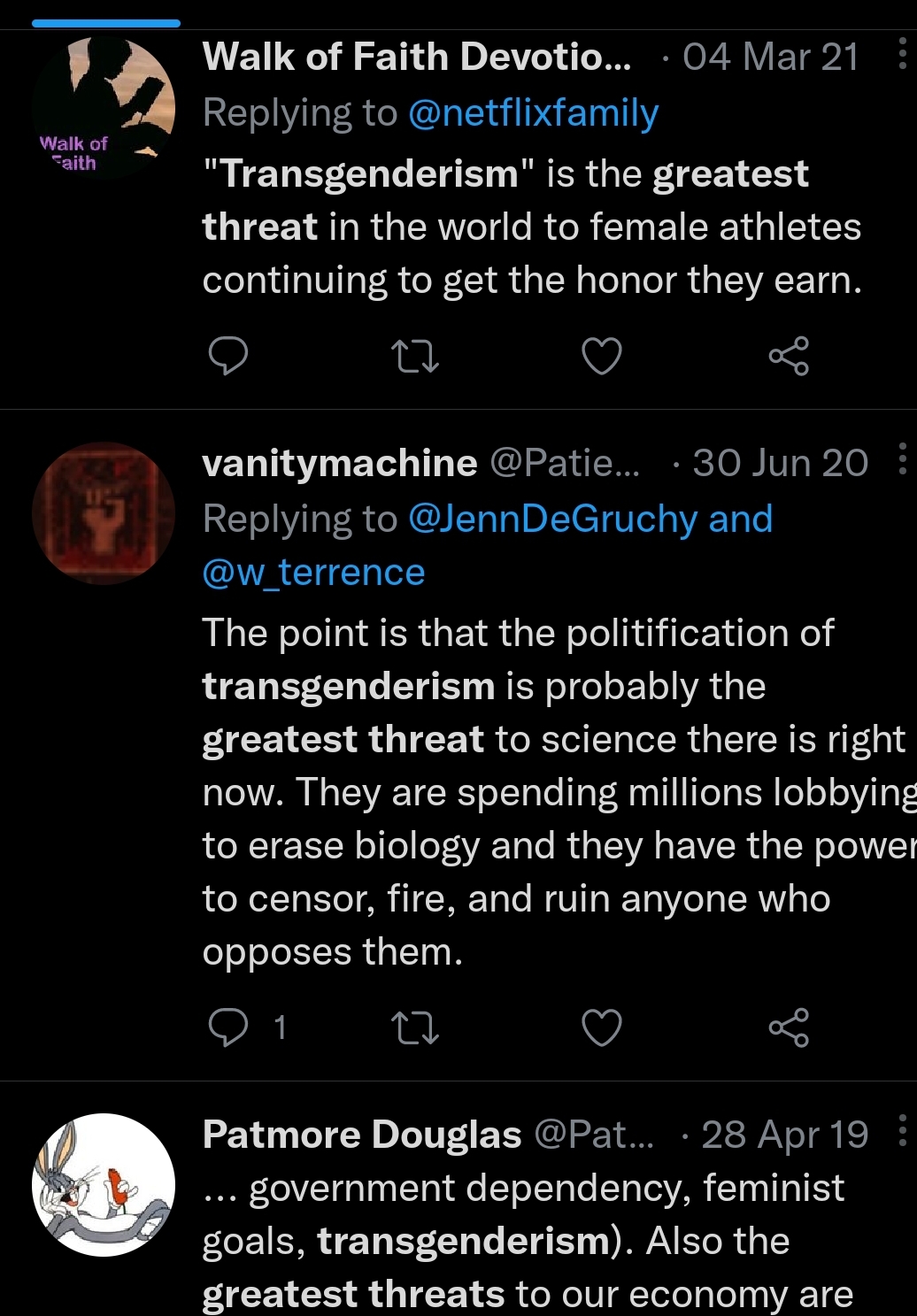 We hear this every couple years. There’s always this existential threat to “the west” (God’s eternal Kingdom, apparently) – the “savages” who refuse to sell us their gold, pesky slaves wanting freedom from “the civilized,” black girls attending public schools, workers wanting not to be abused, geology, rock music, feminism, communists, condoms & pills, gay people, marijuana, Mexicans near Texas, “the Chinese,” Critical Race Theory, “the Jews,” sociology, “wokism,” Twitter bans, the owner of Twitter, insubordinate wives on Twitter, women who refuse to be married, women who refuse to reproduce in order to “strengthen the nation,” women with short hair and leggings, Bill Gates and George Soros, single person gender neutral bathrooms…it’s an endless list of enemies and nefarious targets peeping up from every corner of your neighborhood and living room rug in a game of wack-a-mole
(…and what about those weird vegans? They’re threatening civilization too! “They’re gonna take the cows!” [A direct quote from the former President] That’s right, I’m looking at you Steve, and other “plant people” and all you traitors of the Patriot way…You will NEVER live healthily without BEEF. It. Is. What’s. For. Dinner. End of discussion.)

Oh, and redheds. They’re causing civilization to collapse as well. (You know who you are, and I know where you drink beer…)

Can’t trust Koreans either. I had one as a theology professor and he always pronounced “sheet of paper” as “shit of paper.” I Iaughed everytime. (But do we really want these kinds of people in our classrooms? In the oval office? Come on people! Don’t be a sheeple!)

But as well all know, the worst are Minnesotans. No comment needed.

In the end, this is all scapegoating and eventually, and in cases regarding sexual and gender minorities (among others), calls for violence – laws and exclusions, deportation, imprisonment, etc.

Call me crazy, but, what if we saw our “traditional values” 100% products of their time as much as all the changes happening around us?
More importantly, what if people weren’t so paranoid?

What if we weren’t filled with such incredible varieties of fear and hatred?

What if our identities weren’t entirely dependent on the views of so many cartoonish, and mostly imaginary, enemies we cant seem to live without?

Wasn’t that the purpose of Jesus saying “love your enemies” in one of the most memorable utterances in the history of our species – to force us to recognize that we are “them,” and “they” are us, and that “other” people’s suffering is *our* suffering?
That’s what love is: fundamentally accepting people who they are and where they are at and seeking their own good. If that sounds scary and risky and hard and socially subversive, that’s because it is. It’s requires us to not try to change someone into ourselves.
And yet doing that is exactly what will change people for the better: Loving people instead of hating them is what will change both us and them into what and who we both need to be. Because their soul and being is no different than mine. (Hence the Golden Rule, which is entirely contingent on empathy.)

“Does that mean I have to eat with Gentiles – and sex workers and fisherman – at the same table?”
Yep.

“Does that mean I have to let my daughter learn how to read and write, and even leave home to go to school if she wants?”
Yep. Time to get over it.

“Does that mean I should defend Muslim students from harassment just months after 9/11?”
Yep. Even that.

“Does that mean I have to let my white child marry his African American boyfriend and love them just the same, as family?”
Yep. Sorry!

“Does that mean I have to drink at the same water fountain as a black person.”
Yep. It’s difficult, I know! But you can do this!

“Does that mean I have attend my brother’s gay wedding?”
Yep. And you should enjoy 2 pieces of cake without feeling guilty! (The Kingdom is all about parties of love triumphing over hate!)

“Does that mean I should intentionally hire women who are “overweight and disgusting,” weak men in wheelchairs, people who “talk funny,” and others who are constantly sidelined because they’re different and nobody wants to “deal with them”?
Yep. You even have to think about them.

“Does that mean I have to share a public bathroom with a trans or nonbinary person”?
Yep. Even if they’re a redheaded transgender vegan Korean who frighten you because of your own personal problems that were systemically programmed into your body and brain since birth.

“Does that mean I have to share my feelings, work through conflict, and forgive people?”
Yes, making yourself vulnerable to others, and forgiving even murderers and thieves – and even multiple times.

You should – and have to – do all these things if you want to love people. (Love is “a law,” “the Greatest Commandment,” “the way of salvation,” “casts out fear,” etc.).
You’ll lose friends and family, and maybe end up an enemy of the state and the church and get killed – like happened to Jesus. But in living “the Way,” at least you will have touched people’s lives, curbed evil, and maybe even sleep with a clean conscience without shame or guilt.

But if you don’t want to love people, you don’t have to do any of this.
You can eat at your own table, free from the unclean fisherman, prostitutes, and barbarians.

You can keep your daughter from leaving home and going to school and developing her own mind and home so she doesnt depend on yours.

You can keep avoiding eye contact and conversation with Muslims and dark-skinned people.

You can keep excluding your gay or trans child from family events and write them out of the will – and continue to makeup excuses for why you won’t see or talk to them like other family members.

You can keep making fun of fat people and avoid hiring “needy” and “high risk” people that might cut into your profits.

You can keep holding grudges, keep withholding your feelings and protecting yourself so the bitterness, resentment, and anger builds impenetrable walls that destroys your ability to love anyone at all.

And of course, you can empower those in the state to enforce all of the above with police and armies to do this dirty work for you, and to assauge your own guilt and complicity. You can give your support to the Holy Empire that oppresses others so you can stay in power over them. And you can even do it in God’s name.
And you will be supported by many. You will benefit socially and financially. “You will have power.” (Cf https://www.nytimes.com/2020/08/09/us/evangelicals-trump-christianity.html)

It also just sucks living in a country where I fear for the safety of my friends simply because of who they are and how they present themselves in public.