Last week my article on the (now popularly infamous) IZA research paper on COVID and the 2020 Sturgis Motorcycle Rally was published in the Rapid City Journal as an editor’s pick. To my surprise, I received more positive feedback than negative (against my expectations).

Many times, however, life unfolds exactly as one would expect.

Take the 2020 Sturgis Rally and the spread of COVID-19 in Pennington County, for example.

If you haven’t learned on what the rally is, you really need to watch this video. If you haven’t heard of Pennington County, you simply need to look at a map. It’s the most populous county near the Rally, bordering Meade County (where the city of Sturgis is). Pennington County is home to almost a 100,000 people—which is quite a bit for South Dakota. Rapid City has over 70,000 residents, and is just a short drive from Sturgis. A lot of people don’t even hang out at Sturgis during the Rally for a variety of reasons.

“The Rally,” of course, constitutes a series of events in the second week of August each year, and the entire surrounding region depends on its tourist revenue to survive. Rapid City and other towns are saturated with bikers eating at restaurants, bars, and doing everything else that bikers do (whatever that is). 2020 was the 80th anniversary of the Rally and brought in about a half a million people. I remember the 75th quite vividly, as it brought over 1 million bikers to a small region in an entire state of less than 780,000. The life-flight hospital helicopter was flying non-stop over my house, sometimes providing fresh meat to those waiting patiently for the right organ in this once-in-a-year harvest.

This year’s 80th was unique: it took place during a global pandemic. And while the IZA, a German economic institute, pumped out a pretty cool article using cell phone tracking records to see how the Rally increased the spread, there is perhaps a more obvious and less econometrically complicated method of seeing its results: the rates of COVID in Pennington County.

But hardly anyone is looking at Pennington County because Sturgis is in Meade County. As I suggested above, this is misleading. The “Rally” isn’t restricted to any single event or place, and Rapid City, in Pennington county, is the second largest town in the state and functions as a hub for the whole Rally event(s). Pennington County, in my view, is as relevant or more relevant than Meade County for studying the spread of COVID from the “rally.”

The data really “speaks for itself” in this case, as I all did was add the dates of the rally on top existing graphs produced by the Rapid City Journal. Remember: COVID-19 has an average incubation period of 11.5 days (usually 4-5 days). While I haven’t ran a formal model (I’m busy doing other things at the moment), there’s no question the results would be statistically significant. The spike and timing is a perfect fit, and I leave you with that: 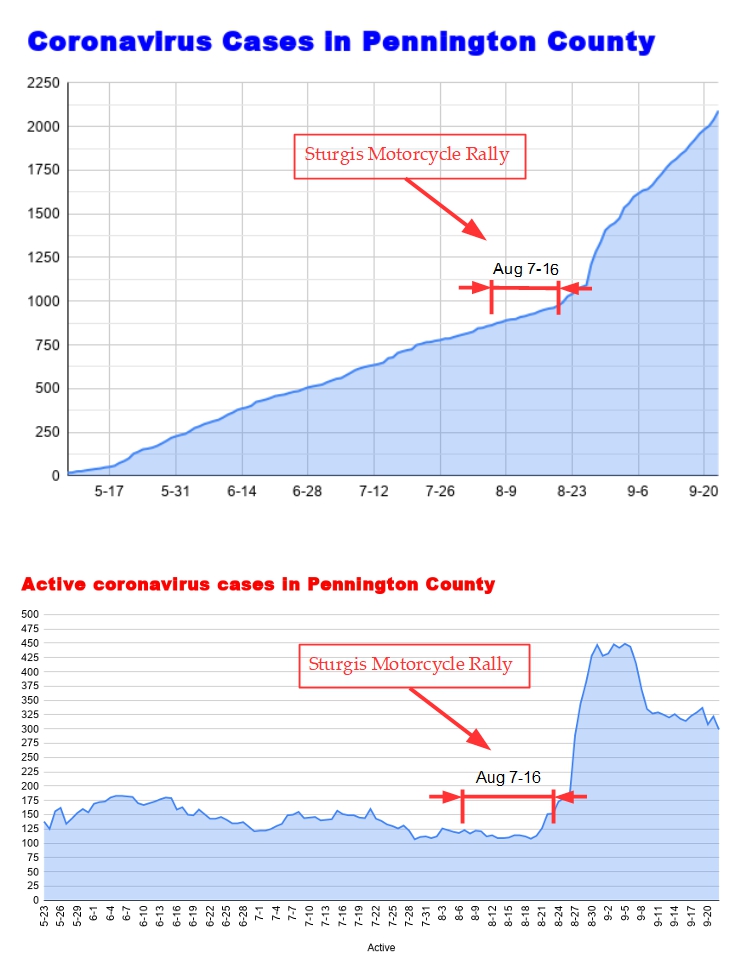