Intended Audience: Those interested in the deconstruction of religion and Christianity, and the post-evangelical movement.

Joshua Harris, who was a major figure in conservative evangelicalism and author of the best-seller I Kissed Dating Goodbye, left religion altogether in the last few years. I don’t fault him for that. (I’m actually thrilled the folks at Christianity Today interviewed him and others for their audio documentary on Mars Hill, because they have rarely ever, in a simple and sincere manner, listened to the voices of those who have left their own fold and/or who criticize conservative American evangelicalism. I think that’s a key reason the series has become so popular). In fact, I’m one of the few people in my own circle of friends that oddly hasn’t abandoned the “Christian” label altogether. (Maybe it’s just my mother’s western-South Dakota-rancher stubbornness)

But what I and others do fault him for, is for creating a fee-charging “course” on how to deconstruct one’s faith, including a list of recommended resources. Why is this inappropriate? Because it was premature and obvious grift. Or as Jamie Lee Finch put it on Twitter, “Joshua Harris will not have my trust until he has earned it. And that’s all I’m going to say.” Exactly. (…though that was not actually all she had to say, and it became clear why…) Harris undoubtedly wants to undo some of the damage he has done, and that’s wonderful. Repentance and repair. Christ’s Body! Let’s do it! But to go it alone and milk twitter followers (something so common nowadays that we don’t even question) without joining hands with those people and institutions who are more seasoned in this space—and to do so in an extremely personal way that puts himself in a position of authority over students without any clear plan about where he’s taking anyone, seems irresponsible.

There was so much pushback that he actually retracted the course today. 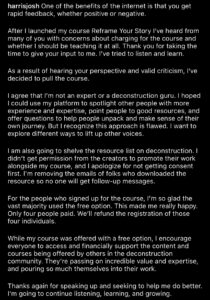 As many of you know, last year I authored a book entitled Deconstructing Evangelicalism: A Letter to a Friend and a Professor’s Guide to Escaping Religious Fundamentalism. It’s an odd book written by an odd person. It has eight appendices, including three course syllabi, a review of a book by John Piper from a peer-review journal, and two annotated bibliographies: one entitled “Deconstructing Before Reconstructing,” and “Reconstructing After Deconstructing.” It’s endorsed by (among others) the former President of the American Academy of Religion and a transgender Fedex Driver whom I adore and went paddleboarding with all summer (until she left us this weekend to do some “Renaissance” festival in Colorado). It’s the fruit of some multi-year meditation, counseling, research, and reflection with others. It is, in other words, like other such projects: it is what Harris’s course could never be.

And in it’s one-page “Orientation,” I make it very clear:

Much of my published work involves criticism, but I think it is unfair and unhelpful to point people away from something without also pointing them towards something better, positive, and hopeful.

You know, now that I read this, I think that’s my Grandma’s optimism coming through. She was Christ embodied to so many of us and I cry about her absence about every week, even though its been years…ugh. Why?

Well anyway. Throughout my career, I’ve been a Youth Pastor, interim preacher, and a theology/religion faculty member at four different universities (two Christian, two secular) and know very much the kind of mental and spiritual chaos I can cause in a college student’s mind and heart. And so (with others) I do everything I can to not be that kind of teacher—the omnipotent prof who takes great pleasure in destroying an undergrad’s evangelical worldview and high-school apologetics games (which doesn’t take much) and then…oh, that’s it, class dismissed! Have a nice life! This is something so wonderful about the liberal arts in particular: it actually carves out a space for real mentorship between student and teacher, so it becomes clear that we’re all on a journey (including teachers), that we really care for each other, and that we need other’s eyes, experience, insight, grief, happiness, anger, and even wisdom. For some readers of Deconstructing Evangelicalism, that comes out clear, and am very happy about it. But whether it succeeds or fails for you (you’ll read it, won’t you, after all that we’ve been through in the last three paragraphs?), I want people to know upfront that I have at least made an effort. OK? I tried.

I obviously never bothered sending the project to a traditional publisher because I knew it would never fly. While it’s personal and kind of readable, it remains dense and unusually structured, and above all, I don’t have over 10,000 twitter followers (major publishers don’t even reply to your emails until first looking at your social media accounts). Capital is King.

But I have done my homework. And I wrote it partly for that reason—because little of what is out there on this subject (much of which is tremendously helpful) is an intense engagement with scholarship; it’s not written for nerdy curious truth-seekers who want to ask the right questions and find some of the right (or at least better) answers, all while sinking their teeth into the forbidden books they didn’t even know were forbidden. Obviously, some people are looking for that, and others aren’t. There’s no one-size fits all.

So here’s my offer, take it or leave it: You can download the entire book for free (for personal reading only and not for redistribution or resell) in the next 72 hours. I’m also going to post all the coupon codes I have for the audio book below. First come first serve (if the code doesn’t work, you’re late to the game). That’s it. No strings attached. If you want to share this blog post to all your friends on Twitter, buy it on amazon and write a 5 star review so I can scrape up some funds to finish insulating my attic, awesome. Or if you want to download it to upload it to some shady server overseas and write a nasty 1 star review on Amazon and make up crazy stuff about how I abused your dogs with flamethrowers as a teenager, God be with you. Bless your heart. There’s no money to be made in academia anyway, and that’s not why any (honest) academic does this kind of stuff. So there it is. From my heart to yours.

For various reasons (such as publication date and others), my annotated bibliographies in the book unfortunately omitted the essential Jesus and John Wayne (DuMez), The Color of Compromise (Tisby), One Nation Under God (Kruse), and Unified We are a Force (Reiger).