Imagine, you wake up one day, and you’re alone.

You’re stressed about life and work, and you’re trying to survive, but you have no one to turn to. Your own family has abandoned you. They won’t provide any financial support, or invite you over for the holidays. They won’t even communicate with you, and when they have, they won’t even say your name. You find it difficult to find work because few employers accept people like you. Your government is doing everything it can to make people like you feel unwelcome, unwanted, and even publicly call you a danger to society. New laws are constantly introduced that target you. Most people believe that this is good and just. So wherever you go, people look at you like you don’t belong. When people learn more about you, they’re frightened or just disgusted.

You and others like you are always in danger. Sometimes, people like you are hunted down, tortured, and killed because of who you are. You constantly live in fear, and you’re terrified of walking alone at night—and during the day.

You’re also too poor to get counseling. The “God-fearing” people around you are convinced that you will burn in “hell forever” simply because of who you are. They believe that telling you this is the most loving thing they can do for you, even though they have no visible compassion. They only want to change you to be more like them, because they are righteous and don’t need to see a physician.

You naturally come to internalize the hate of others, so that you begin to hate yourself. Since you are unloved, uncared for, and unprotected, and everyone seems to believe you should be excluded wherever you go, you see no point to living.

This day has more significance to me this year than ever before, because I now have several friends who are trans, because my wife (a psychotherapist) has many clients who are trans, and because both of us are trying to get by living in the most anti-transgender state in the United States. The way that our friends and those in our community are singled out and targeted is therefore very troubling for us—though not as near as much for our friends and co-workers who are turning to drugs, to moving away, to suicide, to deal with being publicly mocked, ridiculed, intentionally misunderstood, and treated as though they were animals.

In each phase of history, there always seems to be scapegoats and hated groups for a particular society. In American history, one can find all kinds of enemies that were greatly feared, like African Americans (“What happens if they get free from slavery? Start owning property? They’ll want as much or more power than we have!“), the communists (“What if their economy gets bigger than ours? What if they develop more nuclear weapons?“), Asians, Japanese, etc. In the subculture of American evangelicalism, this kind of social behavior is more pronounced during times of natural disasters, as this sarcastic (but largely true) meme illustrates: 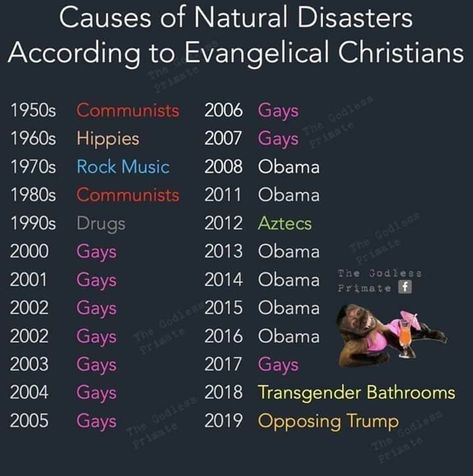 In 2020, Michelle Bachmann updated the list to add “Black Transgender Marxists” as a cause for the West’s woes.

I can’t help but notice in all this fear-mongering, that those who we are supposed to fear are often those who have little power. In fact, somehow, as a culture and society, we are expected to be alarmed about the most vulnerable subgroups in society. Sexual and gender minorities are, we should be reminded, minorities.

“Only girls should play girls’ sports,” Noem tweeted Monday evening. “Given the legislature’s failure to accept my proposed revisions to HB 1217, I am immediately signing two executive orders to address this issue: one to protect fairness in K-12 athletics, and another to do so in college athletics.”

This was after Noem failed to pass transgender bills in congress that would have tanked the state’s reputation and economy (especially in sports), and after her revisions to avoid such a disaster proved so unconstitutional that not even her Republican sycophants in congress supported her monarchical-like actions.

All this is to say the obvious: that there is no real or rational cause for alarm when it comes to either transgender people, or transgender people in sports. Nor is there cause for alarm when it comes to Asians, Muslims, Arabs, etc. (Seriously, all you have to do is leave the living room, make some transgender friends, and then go back to bed and sleep soundly knowing that you made some new friends and that they aren’t actually all that terrifying).

As I indicated in the preface, these are real problems. I have heard more than once from Jessica, other counselors, and countless others through private social media and communication, that “Christians are killing trans people,” and “Kristi Noem is the reason trans people are turning to meth,” and so on. These are not exaggerations. There are entire books in the social sciences demonstrating these kinds of relationships. It’s quite simple: When you are systematically excluded, targeted, intentionally misunderstood, told the Creator of the world hates you, and treated like a non-human, then you will do dehumanizing things to yourself and probably to others. What we put into people is what comes out of people.

The “problem” with being gay isn’t the person who’s gay, it’s with the world that has a problem with gay people.

The “problem” with women isn’t women, it’s a world dominated by men that have a problem with women.

The “problem” with the poor isn’t the poor, it’s a world of abundant wealth that continues to needlessly impoverish people.

The “problem” with this Jewish carpenter in Galilee wasn’t with him and his weird disciples, it was with the screwed up world that had a problem with them.

One could go on, but hopefully this practice in perceptual inversion gets the point across.

I come from a family of rural ranchers and farmers. And life tends to be simple. Sun goes up in the east, goes down in the west. Plant in the spring, harvest in the fall. In the ancient world, this direct engagement with nature brought about some of the most ingenious, powerful, and sophisticated philosophy ever iterated, but also some of the most embarrassing over-simplifications.

What is nature made out of, for example? Well, for a while, it was wind, water, fire and earth. And that made perfect sense for its time. But that model quickly became deficient in light of new experiences and knowledge. Eventually, we reached to the point we’re at now: the periodic table of elements. Far more detailed and robust.

What kind of people are there? Well, for a long time, it was just male and female. And that made sense for a time. But that model eventually became deficient in light of new experiences and knowledge. Third genders were acknowledged many centuries ago in various cultures. Eventually, we reached the point we’re at now: sex, gender identity, gender expression, sexual attraction, and even romantic attraction are all different things—and none of them are ultimately binary. Male and female is more like “day and night” in the same book of Genesis that draws such a duality: polarities with various shades of twilight. 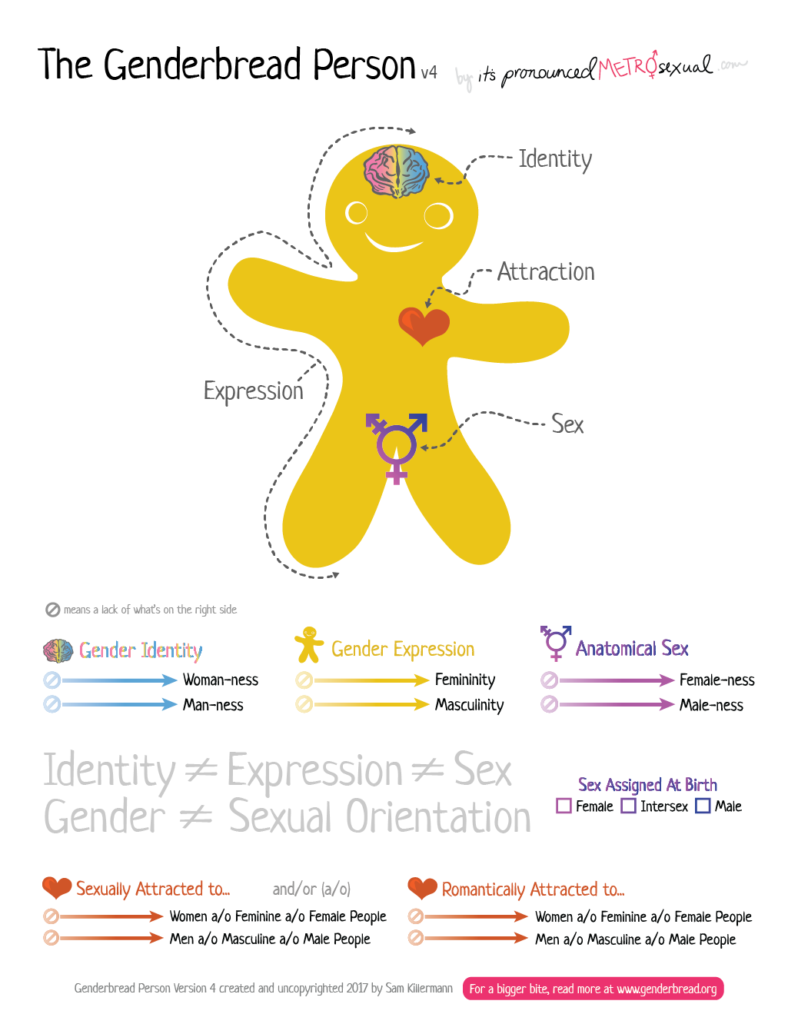 What’s weird is not this change in perception about human psychology and biology. Of course our knowledge of ourselves is going to grow more sophisticated.

What is weird to me is how many people actually believe that our knowledge of ourselves would never (or should never) change and develop.

So instead of waving a dismissive hand about “progressive” or “political” (?) distinctions in anthropology that are now found in ordinary college textbooks, perhaps we should just educate ourselves about ourselves as human beings, and listen to the experience of those around us as if our own experience is not ultimate. Because it isn’t ultimate.

And because saying “only girls should play girls sports” is just code for saying “we refuse to acknowledge that transgender people exist because we’re afraid of this reality and what this might mean for us as non-transgender transphobic people…We might be forced to accept people that we hate.”

Finally, in this third part, I want to just say that I have a few anti-trans friends who are absolutely convinced that there is no distinction between sex and gender, and that human beings are “ontologically” or “essentially” either male or female.

But when I have asked them what this means, I have never gotten a clear answer.

That’s because there is none. The conversation typically goes like this:

It might also continue in circles from there until it becomes dreadfully evident that sex isn’t gender, and that gender is a social construct, a performance that is entirely within our hands to change. All of us are in drag, as it has been said. We know this because of how concepts of gender have changed throughout time. What was considered “manly” at one time is considered “feminine” in another, and vice versa, changing across cultures as well.

This scares the crap out of us because it means we’re responsible. We are living in a world of our own creation, and we have the power, and indeed, sometimes the responsibility, to change it towards better ends. (Better ends being like, oh I don’t know, allowing women to wear trousers in public! Just remember: Every time you see a woman in public wearing jeans, you have feminists to thank.)

Transgender people are living authentically according to how they understand themselves, and how they themselves conduct their own lives. And since only they have access to their own psychological, first-person perceptions, we can never be in a place to say “you’re all mistaken.” That’s like telling a group of people whose hands are burning from scalding water “you’re not actually experiencing pain,” or family members who saw a bird fly across the yard, “none of you saw a bird fly across the yard.” This is why the deluded, ultra-relativist person is not the transgender person or community, but those who believe transgender people’s collective, immediate experience can be reliably discounted.

Those who insist on misgendering trans people are not just being disrespectful, they’re being egotistic, unable to escape the thought-forms of their own enculturation and unwilling to see things from someone else’s experience. They lack the emotional intelligence necessary to love someone as they would love themselves (and perhaps other intelligence that would prevent them from using hideously outdated models of psychology, biology, and sociology). But if the Golden Rule isn’t Golden (the “gold-standard” for behavior), then what is it?

In conclusion, trans people are people, and we should be afraid of our own fears more than people who are different than ourselves. Hatred leads to violence, and we don’t want that.

I conclude with words written a few minutes ago by Jessica:

I would just like to say that transgender people don’t need your pity. There’s nothing sad or heartbreaking or upsetting or icky or volatile about being transgender. If you’re lookin’ to pity, pity the anti-trans agenda and transphobia; that’s what’s sad and heartbreaking and upsetting, icky and volatile.
So come out from behind your pity. Start using people’s names and pronouns. Start sticking up for them. Start accepting and understanding them and learning from them. Love. It’s simple. Even your kids are doing it.
Here’s to hoping you get some transmagic in your life.

I know it’s changed mine