What if Amazon was a coop?

What if one day, the conscience of Jeff Bezos, Amazon’s board, and executive leadership suddenly kicked in, and they realized that the workers of Amazon (and not just its founders or its leadership) are the ones who built it and are therefore entitled to its equity and profits, and that it’s wrong to threaten employees for unionizing and for having to go to the bathroom (being forced to pee in bottles).

So they convert to cooperative, where employees are the owners and exercise democratic control over the company. It’s sort of like Mondragon in Spain (88,000 associates), only much larger.

We’re making a bunch of assumptions in this model (ignoring, for example, the debt structure and the complications of moving public stock into employee equity, etc.). But, taking market cap at face value, I’m curious just to see what kind of wealth distribution would result if Amazon converted to a coop in 2021. How much better off would Amazon’s employees be? Would Jeff Bezos still be the richest man in the world?

Scenario One: Majority-Owned by Workers

The most practical conversion to a coop would be one in which workers own most of the company, but not all of it. That way, public shares can still be traded, Jeff Bezos can still hold on to his portion (10%), and workers have the lion’s share of profit and control as they ought. Everyone wins, though the stock price of Amazon would be less for investors like JP Morgan and Blackrock (both big owners of Amazon).

So let’s say workers own 60% of Amazon, while Bezos owns his 10%, and the remaining 30% are owned and traded by public shareholders.

Guess what? Even though Amazon is now majority owned and controlled by workers, Jeff Bezos would still be the richest man on earth—while Amazon’s 1.5 million workers would each have $640,000 of wealth. That’s equity, not income. Income is paid in addition to the owning of this equity. (As far as what stock prices would be for shareholders, I don’t know and don’t really care since that’s secondary, if not tertiary.) 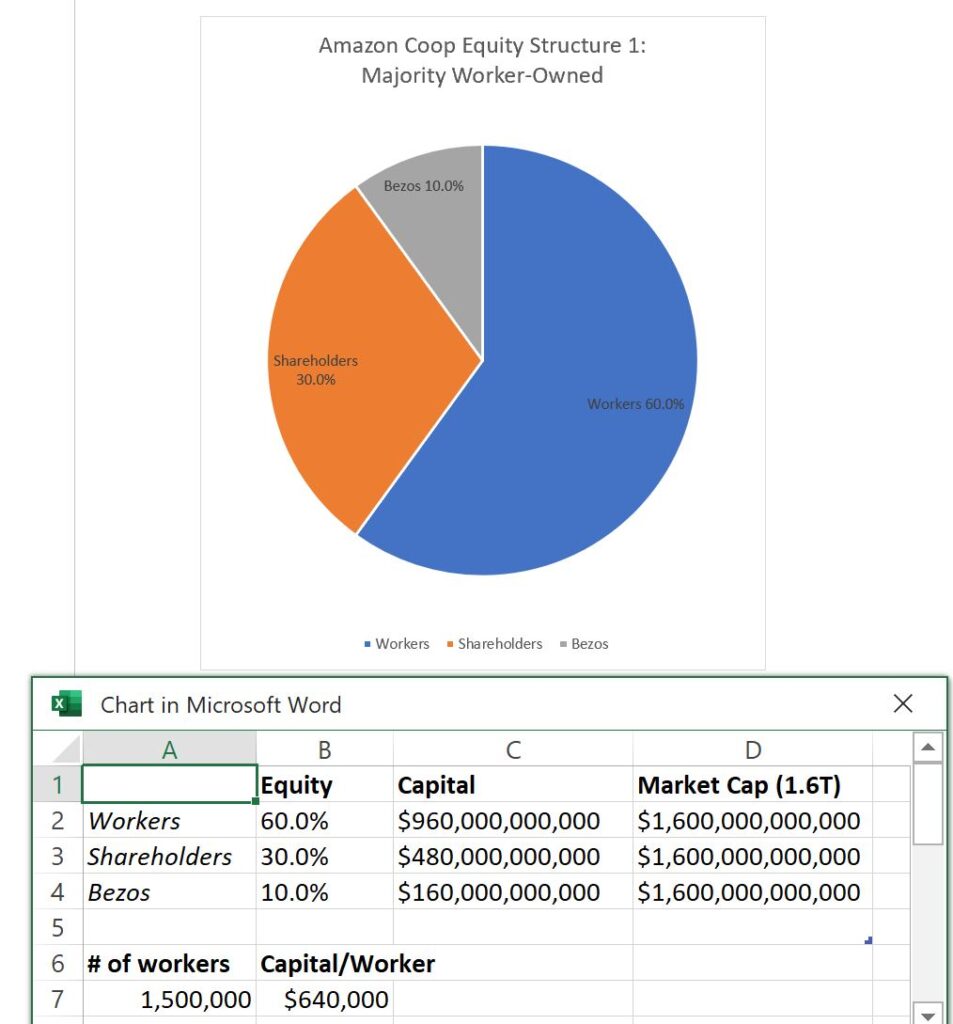 Let’s say Amazon goes full-on scary socialist Marxist communist leftist pot-smoking hippy farm. 100% of the company is now owned by its workers. Jeff Bezos followed Jesus’ command to sell all he had and give to the poor, and the shareholders fled the country after national strikes and riots. What kind of wealth would each Amazon worker have now?

Answer: Over a million bucks a person.

If Bezos was just another one of these workers, he would be a millionaire—but so would all the other workers. All of them working together created Amazon which is worth so much.

Of course, this is true even if Amazon wasn’t a cooperative. The company was created by its workers. It’s just that the value the workers produced is withheld. Instead of sharing profits each month, workers are paid a wage (a sort of “interest”) just for showing up, but the actual value that they produced for the economy (“profit”) isn’t given to them at all.

First, because the average Amazon employee makes around $30,000/year (median) which is basically poverty level, and the company can easily (easily!) afford to pay a more livable wage, and because these employees simultaneously have virtually no rights or control or legal ownership of their own company, it is highly unethical that Amazon continue its economic exploitation of over a million people.

Second, that it would be great if Amazon converted to a cooperative, and it could still be done without eliminating either private equities markets (tradeable shares) or the richest man on earth. I have no idea how much equity the average Amazon worker has. But if it is anything like most Americans with these kinds of jobs, the net worth of most of them is probably zero or less than zero (having more liabilities than assets). This would mean that a boost to $600,000 in wealth (and growing) would be an exponential decrease in the level of relative inequality within the company, and would also reduce inequality in the economy as a whole (though not as much on the aggregate).

John Restakis, Humanizing the Economy: Cooperatives in the Age of Capital

Richard Wolff, Democracy at Work: A Cure for Capitalism